The Fascists Already Have the Keys and the Handcuffs

I've heard that even with the success of protesters holding up the nazis for over an hour from starting their rally last weekend, some folks still insist that they should just be ignored.  True, they wouldn't have had an audience and perhaps no media coverage had no one showed up to oppose them.  While I'm interested in what the opposition may have accomplished as far as the NSM's enthusiasm or ability to organize in this city goes, I am also interested in some differences in media coverage and what that might mean. 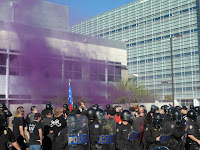 Last year, observations were made that at least one TV channel's coverage simply characterized the NSM rally as an anti-immigrant rally (well, that probably wasn't their wording).  They showed the seig heils and uniforms and such, but they made no reference to their extremist politics.  I thought this was good in a way- blurring the lines between swastika-wearing NSM extremists and the extremists who wear suits or police uniforms and deny their racism is probably a good thing.  Especially since most of those who oppose the NSM tend to ignore the other anti-immigrant rallies and tea-party rallies (much of which overlap).  On the other hand, it is important for people to know that there are actual nazis in town (okay, a lot of the ones who actually organize are from out of town, fortunately) and that nazis LOVE SB 1070.  The resistance against the NSM march and rally brought this out into the limelight.

Not so long ago, NSM members JT Ready (not in NSM anymore but affiliated is what we hear) and Harry Hughes (both attended this last NSM rally), called on others to patrol areas of Pinal County to for migrants.  Phoenix Insurgent writes in reference to Stephen Lemons' column, "one of the things I picked up on was Pinal County Sheriff Paul Babeu's failure to denounce the Nazi composition of the patrols. Sure, he says that he doesn't think the patrols would be helpful, but it seems as if Babeu, like the local media (with the exception of Lemons), has opted to treat Ready's little Nazi crew as legitimate, giving him a pass on his white supremacist beliefs and his many violent threats. Consider the fact the two media headlines about the event identify the NSM in the title only as a 'militia', not as Nazis or even a 'Nazi militia'. A more honest characterization would surely change the way people view the action" (Source).  The Feathered Bastard has also pointed out how newscasters are hesitant to call Nazis what they are.

This weekend, however, the media is being much more clear about who was being opposed.  "Neo-Nazi march met by protesters in Phoenix" was Channel 3's headline. "Police Arrest 2 In Clash With Neo-Nazis" was Channel 5's. Channel 10: "Neo-Nazis Protest in Downtown Phoenix". 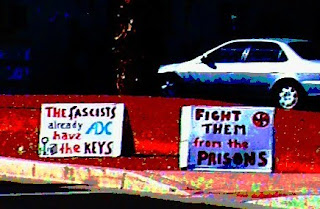 In some ways it is useful that they are being identified as neo-nazis.  In other ways, we mustn't fall into the tendency of seeing the nazis as separate from the other anti-immigrant folks.  Within the anti-immigrant movement, they are the fanatics making the others look more legitimate, more reasonable.  If we only focus on them, we lose sight of the bigger picture, just as focusing on Arpaio draws opposition away from the other police who make even more arrests but without making a show of it.   This comparison also brings up the other point about separating white supremacists from institutional white supremacy/racism, which I brought up in my last post.  As pointed out by a sign in a photo on the Prison Abolitionist blog, "The Fascists already have the Keys".

We should consider the ways in which focusing on the fascists legitimizes the other forms of white supremacy- those with more power.  This is not to imply that the folks resisting the nazis otherwise ignore these other forms--in fact the protest was in many ways just as much against the police as the nazis.  The relationship between the two is explained at the Fires Never Extinguished blog as well, but of course the issue with the police is not only their protection of and participation with nazis, but their role being mostly to enforce the color line such as through police brutality and murder as we saw in the case of Oscar Grant earlier this year.

I hope to see the kind of enthusiasm that surrounds protesting nazis also shown in cases of police brutality and prison issues in the future.  There is something to say about how resistance affects the general population's view of things, not to mention the ability of those systems and people to function in the first place.
Posted by chaparral at 7:37 PM 1 comment: