ANGRY COMMUNITY MEMBERS STORM G4S OFFICE
Press statement
Censored NewsProtest Targets Prison Firm for Profiteering, Police Cite 16 for TrespassingTUCSON --(June 29, 2011) At around 2 p.m., community members burst uninvited into the Tucson offices of private security firm G4S and declared in no uncertain terms their opposition to the company’s profiteering at the expense of immigrant communities in Tucson, across the nation and throughout the world. Incensed by G4S’ role in promoting the criminalization of immigrants and the expansion of the private prison industry, the protestors entered the G4S office complex, delivered a letter to company representatives and unfurled a banner reading “G4S: Prison profiteering destroys communities.”
Today’s action, which was organized autonomously by Tucson community members, was carried out under the banner of Direct Action for Freedom of Movement. Although the protesters were never asked to leave the building, and were there only 10 minutes, the Tucson Police cited 16 individuals for criminal trespassing.
G4S is the world’s largest security company and has public contracts to transport, detain and imprison immigrants throughout the world. The company is infamous for the mistreatment of individuals in its custody, with the most atrocious examples including the senseless deaths of two inmates in 2010. Since 2006, G4S has provided transportation for Customs and Border Protection and, in 2010 alone, secured over 125 million dollars in contracts from the Department of Homeland Security. Read more ...
http://censored-news.blogspot.com/2011/06/tucson-angry-community-members-storm.html

Also see:
Australian Aboriginal elder cooked to death by G4S
Duty of Care: beyond the case of Mr Ward, cooked to death by gigantic outsourcer G4SClare Sambrook, 8 June 2011
Last week in Western Australia, Graham Powell and Nina Stokoe, two former private security guards, pleaded not guilty to charges relating to the death of renowned Aboriginal elder Mr Ward, cooked to death while being transported more than 220 miles across searing Goldfields in a badly maintained van with faulty air conditioning in January 2008.
Read more:http://www.opendemocracy.net/ourkingdom/clare-sambrook/duty-of-care-beyond-case-of-mr-ward-cooked-to-death-by-gigantic-outsourcer
Posted by chaparral at 11:07 PM No comments:

Chinga la Migra!  Here are some recent articles on the hacked websites and information that targeted Arizona police agencies in response to racism.

I know various people are making suggestions as to who could be targeted next.  In my humble opinion, Arpaio might be on the top of the list, Arizona Legislative Exchange Council, Geo Group, Corrections Corporation of America, Arizona-Mexico Commission...


See also: http://firesneverextinguished.blogspot.com/2011/07/hazy-shade-of-criminal-antisec-police.html
Posted by chaparral at 11:02 PM No comments: 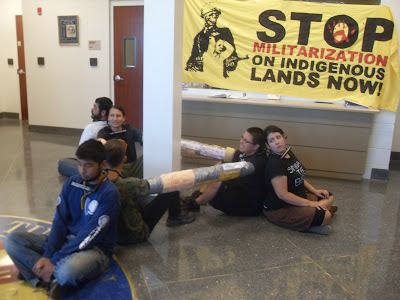 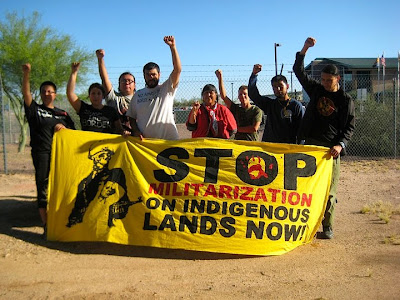 Chuckson (Tucson), AZ - The six protesters who locked-down and occupied the United States Border Patrol (BP) – Tucson Headquarters on May 21, 2010 were found not guilty on the remaining count of a disorderly conduct "with serious disruptive behavior” charge.

The legal defense, William G. Walker and Jeffrey J. Rogers, argued that the remaining charge of disorderly conduct did not apply because it did not meet any of the statutes of the charge. After three hours of deliberation, the judge found the six not guilty.

The city prosecutor had attempted to re-introduce the previously misfiled criminal trespassing as a misdemeanor charge, but this charge was dismissed after the first trial date for the occupiers in February. After an objection by the defense, the state’s motion was denied.

The video below of Harsha Walia of No One is Illegal in Canada is a couple years old, but i just came across it and wanted to share it.  She addresses some of the common struggles between indigenous and immigrant communities and what solidarity looks like.  These things are being increasingly discussed in Arizona.  The primary issue is the marginalization of the impacts on indigenous people the border has, and in particular, how Comprehensive Immigration Reform will more than likely bring increased border militarization to indigenous communities along the border.

There is also a marginalization of local indigenous struggles in favor of a concept of pan-indigenism (if indigenous issues are brought up at all).  One local struggle is against the Loop 202 South Mountain Freeway extension.  There was a recent action addressing a member of the Maricopa County Board of Supervisors who has come into conflict with Arpaio over his immigration sweeps.  To me, this action not only calls out Wilcox, but those who see her as an ally in the immigrants rights struggle.  It has become more clear that she is not an ally (not even to migrants) especially because of her involvement in the pro-NAFTA Arizona-Mexico Commission which is a private entity influencing policy and development.

The statement says, "Mary Rose Wilcox... you continue to posit yourself as some champion of immigrant and worker rights... [W]e are pro-migrant, and in our support of immigrants who have been dispossessed by predatory American trade policies, we recognize that it is those trade policies, in particular NAFTA, that are the enemy of all workers in North America. What, then, is solidarity when you support all of these conditions that line the pockets of corporations, while keeping indigenous people, workers, and immigrants down?
It is your involvement in the Arizona-Mexico Commission that signals your complicity with the exploitation caused by neo-liberal trade that continues to impact people’s lives in Mexico by dispossessing them and keeping wages in the toilet, forcing the poorest to migrate for survival... Another of the consequences of increased trade between Arizona and Mexico are the proposed freeways that would devastate the land and air, in particular the proposed Loop 202 freeway extension through the Gila River Indian Community (Akimel O’odham land). Surely, you’re aware that the tribe has opposed the freeway extension, as both District 6 in Gila River, and the tribe as a whole has previously opposed any new freeway, so it should be no surprise that there continues to be opposition..."  Read the entire statement here.

Posted by chaparral at 2:16 PM No comments:

Designed to Kill: Border Policy and How to Change it (Crimethinc)


This article is from the Crimethinc. reading library. I imagine it'll be printed in Rolling Thunder. It is definitely worth a read, really well written, and covers so much ground regarding the issues. If this piece of writing had existed 5 years ago, i probably wouldn't have felt so compelled to start my own writing on such subjects.

There are a few things I would've said differently, but one thing i especially wish it would've addressed more was the way the border impacts indigenous communities on the border. I think this is such an important piece of the puzzle, especially when so many anarchists and other anti-authoritarians support others' fight for Comprehensive Immigration Reform which would only contribute to more border militarization.

Designed to Kill: Border Policy and How to Change it

For a number of years now I’ve worked in the desert on the Mexican-American border with a group that provides humanitarian aid to migrants who are attempting to enter the United States—a journey that claims hundreds of lives every year. We’ve spent years mapping the trails that cross this desert. We walk the trails, find places to leave food and water along them, look for people in distress, and provide medical care when we run into someone who needs it. If the situation is bad enough, we can get an ambulance or helicopter to bring people to the hospital. We strive to act in accordance with the migrants’ wishes at all times, and we never call the Border Patrol on people who don’t want to turn themselves in.
During this time I’ve been a part of many extraordinary situations and I’ve heard about many more. Some of the things I’ve seen have been truly heartwarming, and some of them have been deeply sad and wrong. I’ve seen people who were too weak to stand, too sick to hold down water, hurt too badly to continue, too scared to sleep, too sad for words, hopelessly lost, desperately hungry, literally dying of thirst, never going to be able to see their children again, vomiting blood, penniless in torn shoes two thousand miles from home, suffering from heat stroke, kidney damage, terrible blisters, wounds, hypothermia, post-traumatic stress, and just about every other tribulation you could possibly think of. I’ve been to places where people were robbed and raped and murdered; my friends have found bodies. In addition to bearing witness to others’ suffering, I myself have fallen off of cliffs, torn my face open on barbed wire, run out of water, had guns pointed at me, been charged by bulls and circled by vultures, jumped over rattlesnakes, pulled pieces of cactus out of many different parts of my body with pliers, had to tear off my pants because they were full of fire ants, gotten gray hairs, and in general poured no small amount of my own sweat, blood, and tears into the thirsty desert. Read more...

Posted by chaparral at 1:37 PM No comments:

I'm also interested in looking at the roles the private prison corporations might have played in any legislation relating to the drug war, as they have with the criminalization of migrants with SB1070 both through ALEC/Russell Pearce and through Governer Jan Brewer.  I intend to look further into that.  I'm also interested, though, in why it the privatization of prisons isn't the problem per se.  There have been economic and political reasons for people to be imprisoned before prisons were privatized.  I discuss that a bit in What came first: the Racism or the Profit Motive?  You can expect more on this in the future.

Posted by chaparral at 3:01 PM No comments: