NOLA Anarcha- Why Anarchists Should Protest the ALEC Conference

It is important for everyone interested in the topics I write on here to know what ALEC is.  I've written a bit about it on a few occasions, and included a bit about them in the video I compiled.

ALEC is meeting in New Orleans in just a few short weeks.  ALEC protests have thus far mostly called for transparency and similar watered-down demands.  The article I include below calls on anarchists to participate.  What I like about the article is that it argues that anarchists should be involved not so much because of the specifics of ALEC's heinousness, but because of what they represent.


While ALEC's dealings aren't a meaningful divergence from the normal machinations of power, it is easier for people to see that the system's a sham, and easier for them to finger the true culprits, when corporations are writing their own legislation. This is why the anti-ALEC organizing to confront those economic power structures is worth supporting.

The article below didn't emphasize the privateness of prisons the way a lot of websites and articles do.  At the same time, the reason I put together the video "Private Prisons in a Wider Context" is because ALEC and privatization of prisons is part of a broader trajectory that we must oppose on that macro scale, which is something I'm seeing very little discussion of so far.

Why Anarchists Should Protest the ALEC Conference in New Orleans, August 5th

The American Legislative Exchange Council (ALEC) is coming to town! They are a bunch of nasty fuckers who bring corporations together with state legislators so corporate lawyers can hand pre-written bills to the politicians, who then try to get the bills passed in their state legislatures. 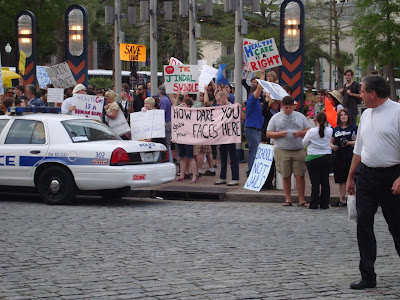 ALEC has been making the news a lot recently, with NPR pieces[pt.1, pt.2] about how, in meetings with private prison corporations, they wrote the infamous SB1070, the anti-immigrant law that anarchists and others have been fighting against in Arizona.

Leaked documents from inside ALEC prompted an interview segment on Democracy Now! The documents show that ALEC, in partnership with it's corporate members, actually wrote many pro-corporate laws that have since gone into effect, including free trade agreements that were a main focus of the anti-globalization movement many anarchists participated in after the WTO protests in Seattle in 1999.

And on the Huffington Post, an article explains how ALEC is carrying forward the ideological program of deregulation and privatization pushed by Milton Friedman. This simplistic, fundamentalist capitalist ideology has had many negative local effects, as was mentioned in a recent article on this blog.

Now, anarchists have no illusions about the fact that big business owns and runs the government, but at least corporate power usually fears public anger that arises from the blatant merger of State and corporate power enough to put on a political puppet show for us! Mostly, the way elites legitimize the unequal and unjust system that they preside over to the rest of us is to make sure that it at least has the appearance of people, through elected politicians, getting to decide democratically what happens in our country. ALEC doesn't bother with that populist song and dance, they facilitate the outright penning of legislation by corporations themselves becoming law. So we end up with things like Immigration Policy, brought to you by Corrections Corporation of America! etc...


While ALEC's dealings aren't a meaningful divergence from the normal machinations of power, it is easier for people to see that the system's a sham, and easier for them to finger the true culprits, when corporations are writing their own legislation. This is why the anti-ALEC organizing to confront those economic power structures is worth supporting.

Of course, there will surely be those in the protest calling for the political charade to be played out fully once again, for the kabuki theater to re-close the curtains that shields us from what's happening backstage, so we can once again be whisked away to fairyland, where democracy exists and people power is in charge, and we can return to our peaceful slumber, dreaming the American Dream.

But, there will be also be people protesting who know returning to the democratic facade is not going to solve any of our problems, and that confronting the corporations behind the curtain of our "democracy" is the first step to destroying their control of our lives and communities.

In that spirit, anarchists should come out to the locally-organized ALEC protests in New Orleans (August 5th, 2pm, 500 Poydras St.). Come out not to demand stricter adherence to lobbying laws, more transparency, or less corruption. Come out to demand an end to the power of corporations, and their use of State violence to increase their wealth, and thereby control over our economy, society, and lives. Come out to say that it doesn't matter whether that power is hidden behind the veil of democracy, or is blatantly transparent, as it is with ALEC, that either way it has to be dismantled. Anarchists should come with flags, in black, or with banners and signs to show our united stance, to show that we are not in favor of a return to the democratic political farce, but organizing for an end to capitalist control.

Not only should anarchists participate in the protest on August 5th, but we should organize other actions to confront the corporations who are members of ALEC during the conference, from August 1st-6th. ALEC's members include oil companies responsible for ruining the Gulf and Wetlands, big banks who own hundreds of foreclosed homes in our city while people sleep on the streets, and private prison companies directly profiting from tough on crime laws, the creation of a racist, militarized police state, and booming incarceration rates, which Louisiana leads the nation in. Let's get creative and use their conference to catalyze our own actions to take back our city from these profiteers of human suffering!